I have to admit that one of the many things I find interesting in history is the efforts to organize churches early in human settlements. Churches served a number of purposes other than the education and nurturing of the soul; they were ways for people that were often scattered, isolated and busy trying to survive to get together, share a meal and exchange information and a way to encourage good behavior when law enforcement was nearly non-existent. And to be honest, I do love visiting old church cemeteries and just being at peace in the quiet of the cemetery. My Mom claims that I’ve trained my car to automatically stop at old cemeteries. Frankly, it is a joint effort of the car and my foot!

Recently, I was meandering through some old, local newspaper articles and stumbled across an article on Yellow River Baptist Church in Okaloosa Co, Florida that cited a book published by the Daughters of the American Revolution on The Pioneer Churches of Florida. Published in 1976, in coordination with the DAR’s local chapters and some local historical groups, it was a short narrative on each county’s oldest known church. I found the book through Abe Books and ordered it. When it arrived, I spent about an hour reading it and particularly dissecting the section on Yellow River Baptist Church.

Before I get to the details on Yellow River Baptist and how that fits with my other efforts to put the history and chronology together for the church and the Oak Grove community, let’s look at the other panhandle counties and their first known churches, at least known by those who were asked in 1976. Also, this would not be a list of the oldest churches in the panhandle. The oldest churches tend to be concentrated where the population settled first. For instance, there are a number of older Baptist churches than some of the later ones listed but they are in counties where there was an even older church, of any denomination, in that county.

Bay County – formed in 1913 from Calhoun and Washington Counties
St. Andrews Presbyterian Church – organized on 13 September 1886 at the home of Hiram Mapes by the Commission of the Presbytery according to the DAR book. The church’s website confirms that date.

Escambia – formed in 1821, one of the two original counties
St. Michael’s Roman Catholic Church dates to 1559 when the Spanish arrived at Pensacola Bay on August 14th. The chapel was originally on Santa Rosa Island according to the DAR book. The church’s website confirms that date. The website indicates that the parish was canonically established on 10 May 1781.

Franklin – formed in 1832 from Gadsden and Washington Counties
Apalachicola Trinity Episcopal Church was chartered in 1838. The Rev. Fitch W. Taylor from the Diocese of Maryland conducted services there as early as 1835 according to the DAR book. Their website indicates that it was charted in 1836.

Gulf – formed in 1925 from Calhoun County
St. John’s Episcopal Church was organized around 1875. In the 1940s an agreement was reached for the Presbyterians (the First Presbyterian Church of Wewahitchka) and Episcopal congregations to share the church according to the DAR book. I was able to find a website that appears to be the right Episcopal Church but it does not provide any historical information.

Holmes – formed in 1848 from Jackson and Walton Counties
Sandy Creek Baptist Church was organized around 1844 according to the DAR book. I could not find anything online as to its continued service though the church and cemetery are on Find-A-Grave and the marquis in front of the church appears to be current.

Liberty – formed in 1855 from Gadsden County
Corinth Baptist Church was founded in 1871 according to the DAR book. Florida Memory has documentation of the church’s history online. The church’s website confirms their history.

Okaloosa – formed in 1915 from Santa Rosa and Walton Counties
Yellow River Baptist Church was founded in June 1840 according to the DAR book. They don’t currently have a website but I’ve seen the founding document in the church’s records so I know this is a fact (See more detail below). 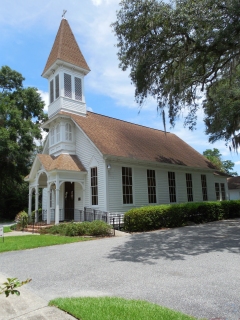 Santa Rosa – formed in 1842 from Escambia County
First Methodist Church in Milton was established soon after Protestantism was permitted sometime between 1821 and 1824 according to the DAR book. The DAR book indicates that the church they are referencing actually started in Escambia County because Santa Rosa did not come to be a county until 1842. It appears to indicate that many of the congregation moved to Milton/Bagdad and by 1837 the first buildings were going up in Milton/Bagdad. The website for the First United Methodist Church of Milton doesn’t match this history, indicating establishment around the time of the Civil War. After a bit of searching, I found that the church described in the DAR is actually the Bagdad United Methodist Church, and this history is confirmed by their website.  They indicate their founding in 1830 which fits in the somewhat convoluted history in the DAR book. 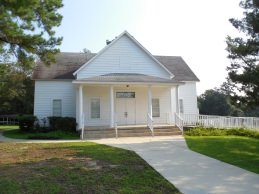 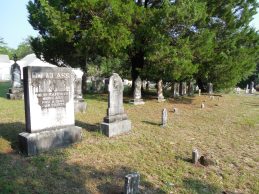 Walton – formed in 1824 from Escambia and Jackson Counties
Euchee Valley Presbyterian Church was established on 26 May 1828 according to the DAR book.  However, the historical marker at the church indicates 27 May 1827.  Their Facebook page has some good photos of the church and the cemetery.  This is a beautiful country church with a peaceful cemetery next to it that is worth the meandering walk among the headstones.  According to their historical marker, the cemetery is the resting place of two signers of Florida’s first constitution.

Washington – formed in 1825 from Jackson and Walton Counties
Only church recorded as early was in Bay County by 1977 according to the DAR book. I found this hard to believe that there were no early churches in Washington County, even though they did lose territory to other counties over the years parts of the remaining county were certainly settled early. So, I did a little online research. According to Dale Cox’s website Explore Southern History, Moss Hill Methodist Church traces its history back to the 1820s.

Northwest Florida’s early churches covers the gamut of denominations; 5 Baptist churches, 2 Methodist churches, 2 Presbyterian churches, 2 Episcopal churches and 1 Catholic church. I would say from reading the book that some of the counties interpreted the defining of the earliest church in the county in a variety of ways but most of these would seem to be accurate based on the settlements in the various areas of the panhandle.

Now to my favorite church subject: Yellow River Baptist Church. (previous posts on the church: here, here, and here)  The book has some good information on the early church location and buildings. The information was submitted by the Historical Society of Okaloosa and Walton Counties but reading the info sure makes me think of Mabel Peaden. Mabel had a wealth of historical detail that she loved to share and she was the Church Clerk for a time and attended the school that was in the area of the original church. Let me just quote the book, “The first services were held in a log building, one mile northwest of the Oak Grove Bridge on the Yellow River. The second building, on the same location, was erected in 1884 and was used until a rectangular two-story, unpainted frame building was erected and dedicated in 1905. We have no record of the fourth building. The fifth and present building (in 1976) was constructed of cement block in 1961.” A little further on they state, “ The first settled pastor was the Reverend George Miller, 1840-1844.”

The fourth building was actually the third building with the top floor removed, according to my Mom who remembers the transformation. That “remodel” is mentioned in the records. There is now a sixth church building (left above). The fifth building (top right) was burned by arsonists in August 1981.

It is difficult to know if the “Oak Grove Bridge” is the bridge that existed in 1976 and built around World War II or the older bridge that was a little south of the existing bridge, but regardless if you use Google Earth and draw a line northwest of the bridge, a mile is located behind the existing church at or near the Old Yellow River Cemetery. This cemetery has not been well cared for and is on property not now owned by the church. The persons owning the property over the years have not always chosen to regard the cemetery as sacred ground. It is sometimes referred to by locals as the “Old Black Cemetery” but my early research indicates not all those with headstones remaining are black, though they may be mixed blood. This may actually be the original church cemetery. The early church had both black and white members. It was common in the early days of America to bury people of color, criminals, those of less than honorable behavior, etc. on the north side of the cemetery property.  That may mean there is more of this cemetery south of these gravestones and among the trees being logged by the current owner.  The cemetery continued to be used for a couple of decades after the church moved.  It is a shame that when the church moved west of its original location, they were not able to protect the cemetery from thoughtless land owners.

Unearthing the Yellow River Baptist Church’s history, one book at a time, one newspaper clipping at a time and one land deed at a time is something I enjoy immensely.  Especially when I can couple that with preserving, transcribing and digitizing the old church records. I suspect my grandfather, John Jesse Barrow, Jr and my great-grandfather William Franklin King, both of whom helped to get the church back to full strength in 1938, are watching over my efforts.

Identifying the churches that were available to your ancestors (where they attended, what denomination it was and what the church believed) provides a deeper understanding of your ancestors, their neighbors and community and how they may have conducted their lives.  It takes genealogy beyond the collection of names to understanding your ancestors in the context of their lives (not what you want them to think or do or be) and the events they lived through. Don’t overlook these records if they are available for your ancestors’ lives. As I move from research to writing a history of the community of Oak Grove, I plan to have a chapter on the church and possibly a booklet on just the church.

My Books for Sale