Randal Fulford of Holmes County was a young man when the Civil War started.  I believe he had been orphaned as a young boy and raised by his mother and stepfather.  He could read and write and did well on his farm and in raising children that were active participants in Holmes County.  His life will be covered in greater detail in my upcoming book on some of my ancestors’ experiences of the War and their lives before and after. I hope some of my efforts to figure out how he came to be in Holmes County to be helpful as you solve your ancestral brick walls and integrate your ancestors into the history of the area.

Randal’s name came to me from my paternal grandmother. She was a wealth of information on both her family and her husband, my grandfather’s, family. As I mentioned in my post on my MARSH line in Holmes County, my grandfather died three years after they were married. Nana, which is what I called her, sat down with me and did her best to share everything she knew. She was my best interviewee; informative and entertaining. I only found about three small errors in her memory. She remembered her great-grandfather’s name as Randal and his mother’s name as Joann or Joanna. She thought he was from Georgia originally and either he or his father had served in some war (they both did, just different wars). She thought his father had died when he was very young and was named Randolph or Randal. She wasn’t sure if Randal had any siblings but she was sure he had lived most of his life in Holmes Co. With that I started my search.

This was before much was online, though I did have access to an excellent genealogy library (Clayton Library) in Houston. I found him after the War but couldn’t find anything before. I began to think he had been born under a rock and raised by wolves. Then I joined Ancestry.com. My search turned up a Randal FOREHAND in a household with James and Jane FOREHAND. There was a younger girl two years younger than him, then there were three more children where the gap between Rebecca and the next one was three years. I rechecked my notes – Nana seemed sure his last name was FULFORD. I saved it just in case. The 1860 census turned up nothing in Holmes County so I widened my search and found him in Coffee Co, AL as a mail carrier and listing his name as Randal FULFORD. Right age to be the Randal FOREHAND in the 1850 census.  Not long afterwards I found information that James FOREHAND had been a postmaster in Holmes Co. I went back and tried to find James and his wife in the 1860 census. This time his wife was listed as Joanna. In time, I discovered that one of Joanna and James’ son was a witness to Randal and his wife’s marriage, that Joanna lived next door to Randal and his family after the War until she died, and that a descendant of another of Joanna and James’ sons remembered that Randal was related to the Forehands somehow, though he wasn’t sure how. I am still trying to confirm Randal is the son of Randolph FULFORD from Lowndes Co, GA and that his mother was Joanna, who married James FOREHAND. All good things in time.

I turned to try and find any records in the War because it was likely he served. He was just 20 years old in 1861. He joined the 4th Florida Infantry, CSA, Co H on 18 Sept 1861 for a period of 12 months. That means he joined before the draft and he did re-enlist for the duration of the war in 1862. What I don’t know clearly is whether this was because he had strong beliefs in the cause of the Confederacy, he felt more allegiance to the Confederacy versus the U.S. government, he was a young man in need of some adventure, or he thought it was the right thing to do or some mix of all of them. Regardless of what we have been told as Southerners, these decisions were not always cut and dry. Just like today, people can and will come to different decisions with the same basic information. There could be a lot of reasons to support the secession of Southern states, or not to support it, or change your mind during the war; and all occurred during the war on both sides.

The 4th Florida Infantry’s first assignment was in Fernandina (Amelia Island), Florida guarding one of the two railroad terminus of the Florida Railroad, the largest rail system in Florida in 1861. In March 1862, he was detailed to pull up track because the troops were withdrawing to Jacksonville. Three companies of the 4th were left behind to protect citizens as the evacuations proceeded. This withdrawal, like the one from Pensacola, was very difficult on the local residents. Much of Jacksonville was burned by the Confederates as they withdrew to move across the panhandle.

The following month the troops of the 4th Florida were transferred to Mobile, AL where Randal served a short time as part of the Provost Guard while troops were being transferred north. The 4th Florida was soon after transferred to Tennessee under the command of General Braxton Bragg. Randall would not return home until months after the war was over.

Once in Murfreesboro and Nashville, TN, the 4th FL Infantry occupied the area between Lebanon and the Nashville turnpike. In October 1862, Randal was admitted to the hospital in Tullahoma. While his diagnosis isn’t listed, the most likely causes of illness during the war was infectious disease and dietary deficiencies/diarrhea. A few days after being admitted he was assigned on extra duty as a cook. Let’s hope he didn’t have Hepatitis A! He did miss the Battle of Stone’s River while in the hospital, possibly a blessing since the 4th Florida Infantry suffered large losses in the battle.

Between May and August of 1863 the 4th Florida Infantry was in Mississippi in Stovall’s Brigade. Here they engaged the Union forces under Grant a number of times trying to hold the Federals back from cutting the Confederacy in two at the Mississippi River. Food and water for the Confederate troops in Mississippi was scarce and poor quality and again Randal found himself in the hospital, again with no diagnosis listed in his records.

The 4th Florida Infantry and their division returned to Tennessee in August/September 1863. Soon afterwards, Chattanooga was abandoned by the Confederacy, moving south to Rome and Atlanta, GA. General Bragg lost a couple of opportunities to engage with the Federals in this movement south either through poor leadership and communication or in-fighting among his subordinates. On the night of 17 Sept 1863, the temperatures dropped to freezing as the army under Bragg was finalizing his plan to attack the Union at Chickamauga. Fighting started two days later on the 19th. The 4th Florida Infantry was heavily engaged in the battle and it was a Western Theatre victory for the South, something that was somewhat elusive during the war in this area. The Federals withdrew to Chattanooga where the siege that would lead to Lincoln promoting General Grant to head all the Union forces occurred. Grant arrived in Chattanooga and took charge of getting the Federals out of the predicament they were in. It took them two months but they did come out and the Battle of Missionary Ridge ensued. It would be Randal’s last battle. 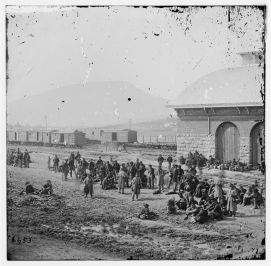 Prisoners of War, Chattanooga, TN, at the Railroad Depot

The 4th Florida was stationed near the top of the ridge but this battle is where the Union forces started climbing the ridge and just kept pushing until they overran the Confederate forces at the top. Their success was a combination of persistence and poor placement of the Confederates on the ridge so that firing down the ridge was extremely difficult.  Randal was wounded in the right hand and taken prisoner on 25 Nov 1863, along with many young men serving in the 4th FL. He was transferred to Rock Island, IL and arrived there in December 1863. He would remain there until 22 Jun 1865 when he finally took the Oath of Allegiance and headed home.  Rock Island became notorious for its reported abuses of prisoners and offers of easier conditions if they would take the Oath of Allegiance. I am positive it wasn’t a vacation resort and many abuses did occur but he thankfully survived because if he hadn’t, I wouldn’t be here.

He married Mary Susan (or sometimes Susian) Webb, daughter of Williford N. WEBB and Susan MERCER WEBB on 3 Apr 1866 in Bonifay, Holmes Co, Florida. Randal and Mary Susan had ten children: Vicie Leavina, an unknown child, Susan Melinda (my 2nd great-grandmother), Martha, Rilla A., Columbus Alexander (first county agent in Holmes Co and school superintendent in 1912), Randolph Marion, Joseph Thomas, another unknown child, and Ada M. There was a young man in Mary Susan’s household in 1920 by the name of George Ellis that is listed as her “adopted son”. I don’t know if his last name is ELLIS or FULFORD. He hasn’t appeared in any other records and presents a mystery to yet solve. 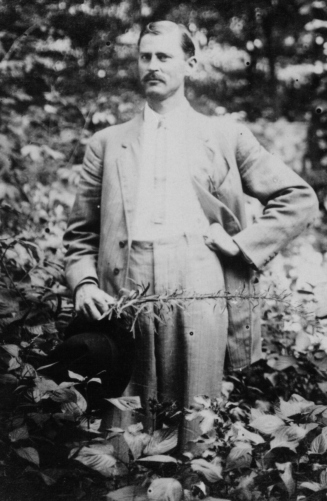 Randal and Mary Susan homesteaded 60 acres in Holmes County, completing the requirements to obtain ownership in 1890.  According to the 1885 agricultural census for Holmes Co, his farm was diversified with animals, grains, fruit trees and honey bees.  Randal died 12 Jan 1899 in Bonifay, Holmes Co, FL and is buried at East Mt Zion Methodist Church. Mary Susan lived another 35 years as a widow. Mary Susan filed for a Confederate pension from the State of Florida in 1923.  Randall never filed for a pension while he was alive, possibly because he wasn’t poor enough.  Their son, Columbus Alexander, married later in life to a younger woman and had six children, the youngest of which I came to know through the Internet in the 1980s. A wonderful woman who shared pictures and stories and her excitement in life and pride for her family. While no one seems to have a picture of Randal, the pictures of his sons tells me he was likely tall and thin, and handsome. The Confederates didn’t provide any description of him. The Federal records on his time at Rock Island are still being waded through since there is no index, though the online records are here along with prisoner of war records from several other prisons.

I’ve written this on Randal for a number of reasons:

My Books for Sale