Have you ever been looking at a census, scanning pages for an ancestor’s name, and begin to notice a pattern that may be telling you something about that community, during that time period? I have, on a number of occasions. One of the more recent ones was when I was scanning through the 1870 Walton County census in the hopes that my 1870 Santa Rosa County ancestors were there by mistake because at this point the whole community of Dixon/Oak Grove is missing in action. They weren’t in Walton County, but I began to notice some interesting things that I would like to share. My observations give us a glimpse of life in the county five years after the War for Southern Independence (aka Civil War, War Between the States).

Before we talk about the patterns we see in the census, let’s discuss Walton County during the War for Southern Independence. During the secession convention in Florida, there were three camps of representatives. Those who wanted immediate secession; those who wanted to wait and see what the other southern states would do, and sometimes what Lincoln would do; and those who did not want secession. This latter tended to use two different arguments: 1) this wasn’t the right time or the right reason to secede. Nothing had been done that actually threatened the South; 2) and a very small minority who were Unionists and were opposed to secession. In the end, those who wanted immediate secession won the day but in the final vote there were seven dissenting votes; two of those were from Walton County.

After Ft. Sumter, there was an immediate move to form military units across the deep south. While some men may have joined a company somewhere other than where they lived, such as going to another location to join with extended family members, many men joined companies in large groups from one or more closely located communities. My own research indicates that Walton County, at a minimum, contributed men to the following companies/regiments: 1) 1st Florida Infantry, 2) 1st FL Reorganized Infantry, 3) 3rd Battalion Florida Cavalry, 4) 4th Florida Battalion Infantry, 5) 6th Florida Infantry, 6) 8th Florida Infantry, 7) 11th Florida Infantry, 8) 6th Alabama Cavalry, 9) 57th Alabama Infantry and 10) 15th Confederate Cavalry. There is some overlap of these men because as the war progressed some of the early regiments that had been decimated by the killed, wounded and deserted were combined with other regiments in similar circumstances, and/or draftees, and formed into new regiments.

Asher and Adams 1871 map of Florida

Walton was not a heavily populated county at the beginning of the war and voting patterns prior to the war had been primarily with the Whigs, but generally, the population accepted the decision to secede. However, in my research on the 1st Florida Union Cavalry, I found that Walton County provided the most men to the Union regiment of the nine counties that furnished the majority of the men. The data on the men who served showed a significant percentage of the men were from four contiguous counties: Walton Co, FL (62 men), Santa Rosa Co, FL (58), Coffee Co, AL (53), and Covington Co, AL (47). Some of these men do not appear to have Confederate records, so they were not deserters.  The fact that they don’t appear to have ever joined means they likely took to the woods to avoid the draft.  If they were drafted, they deserted and took to the woods to avoid the militia rounding up draft dodgers.

This might indicate that after the war, there may have been more community tension than in counties where more of the men had only served the Confederacy. But being thinly populated, and significantly populated with Scot-Irish known for their independent ways, may have decreased that conflict. Hopefully, research in these less sexy aspects of the war will continue and help us to understand our ancestors and their communities.

The war was finally over. If Confederates, they returned home on the losing side and traumatized by the combat they had experienced. If Unionists they returned home to potential conflict with neighbors or family. Men from both sides returned to devastated communities, damaged and missing equipment to support basic needs, non-functioning farms, a devastated economy, and likely a hungry family. Five years later we get a glimpse into these communities in the 1870 census.

As you meander through the census of 1870 in Walton County you will notice more female heads-of-household than you see in the 1860 or the 1880 census. This reflects the devastating loss of men during the War for Southern Independence. While it certainly isn’t a majority of households, I would guess it is between 5 and 10%, based on a quick survey of 22 pages. I will eventually make my way through the entire census and do a little figuring, but I think this will be close. The female heads-of-household are both black and white and we are provided with occupations for these women, also not something we see much before or after, until the 1940s. In earlier and later censuses, even if the widowed female is obviously head-of-household she will often not have an occupation listed and the oldest son will be the one listed with an occupation. The female occupations listed in my survey, again, are likely indicative of what will be found in the entire census: farmers, innkeepers, midwives, seamstresses, weavers, spinners, laborers, one woman “keeping a mill” versus being a miller, and at least one woman plying her personal attributes (occupation: harlot). With the last one, my immediate reaction was wondering if the census-taker knew her “profession” from experience or hearsay or by some chance did she tell him when he asked.  I also wondered if her first name was really Bashaby (Basheba) or if that was an assumed name (see page 58 in the second batch of pages)

We still see a sizable number of households who have a middling value of wealth based on personal and real estate values listed. Except for the occasional visit by the Union forces from Ft. Barrancas and the invasion of the area leading up to the Battle of Marianna during 1864, this part of Florida did not see extensive fighting. However, the Confederate government did take foodstuff and horses from farms across the panhandle and both sides tended to target farms suspected of being owned by someone with sympathies toward the other side; which placed residents squarely between two armies. And as mentioned above, the upper Yellow River area and the northern part of Santa Rosa and Walton County contributed a sizable portion of men to the 1st Florida Cavalry Union (see here, here and here). 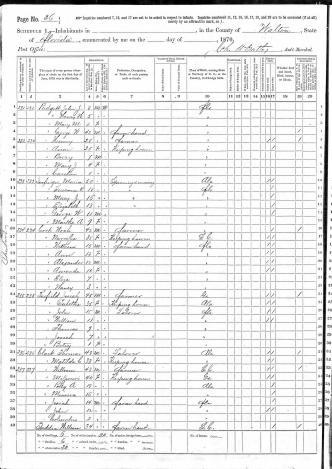 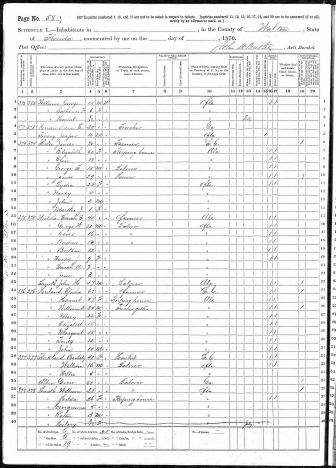 The county seems overall to be well diversified in terms of occupations.  Many were farmers and stockkeepers but there are also carpenters and mechanics; ship carpenters; ship captains and captains of lighters; lumbermen and mill workers; millers; merchants; innkeepers; blacksmiths; spinners, weavers, milliners and seamstresses; at least two midwives (one black, one white); and a couple of folks listed as superannuated, or retired in our current language.  We also see a significant percentage of men listed as laborers and farm laborers. Most have no personal or real estate property or very little. These would be the families that found themselves with nothing after the war. If they owned their land before, it was lost or destroyed. Both black and white families, these are the families that would populate the sharecropper caste as the South moved into the Gilded Age and the early 20th century. As mentioned in a previous post, this was a route to enduring poverty and likely led to the first migration of families from farms to industrial work.

The 1870 census is our first glimpse into the Florida panhandle communities after the War for Southern Independence and a fascinating look at a moment in time between the Southern world before the war and what would become the Gilded Age of the late 19th century. Unfortunately, a number of areas in the panhandle seem to be missing on this census and regardless of my personal wading through adjacent areas, I’ve had no luck so far finding some northern areas of the panhandle counties. I continue to hope I will stumble across them one day. It would be interesting to see if some of these patterns hold for other areas of the panhandle. Another to-do project to add to my list.

Our ancestors were not isolated, nuclear families. They were members of communities that succeeded and struggled together. While laying out your family tree, take time to try and get a broader view of the places where they lived. The neighbors may be relatives, but even if they aren’t they experienced many of the same things your ancestors experienced and may have left a record that your ancestor did not leave behind that can provide clues to your tree or the trials your ancestor’s community encountered. You never know!

3 thoughts on “The 1870 Walton County Census: A Glimpse in Time”