A few months ago I was browsing early Pensacola Journal newspapers at the Chronicling America website and discovered that they would occasionally do a whole section of the paper on a Florida Panhandle county with ads and articles about the county. I quickly got sidetracked from what I had gone there to look for and immersed myself in searching and reading sections for most of the counties I attempt to highlight in this blog. So, off and on for the rest of this year, I will take one of those county sections and share what is there, including some names mentioned. I’m pretty sure the ones I discovered are not the only gems to be found, so go to Chronicling America and do some searching on your own. The site is free.

The above should be an indication to all family researchers who are looking for those family members hiding under rocks to really study boundary lines for counties. You just may be looking in the wrong county for your ancestor at a given point in time.  They may not have moved, but the counties did around them.

Let me say a little about the wealth of material that can be found in old newspapers for both the historian, especially the social historian, and the genealogist. Now that we have the Internet available and companies and archives digitizing old documents of all sorts, we are blessed to have ready access to materials that required much more time and expense to access just a few years ago. Historical newspapers are rapidly becoming more available. I will admit that I do carry a subscription to a paid site, but like genealogy with the wealth of material available for free at www.familysearch.org, there are also sites with free access to some old newspapers. All of The Pensacola Journal articles I will reference here and in future posts were reviewed, and downloaded, at Chronicling America. They currently have about 40 Florida newspapers digitized to some extent. A handful cover the panhandle.

The Pensacola Journal issue of Sunday, 28 July 1907, highlighted Washington County and its county seat of Chipley. There are a total of eight pages of materials and ads all focused on Washington County. It is true that most of the articles extol the virtues and don’t spend time discussing any negative issues, but they are still interesting reading from the time. Even more interesting are pictures of homes and names of some of the residents, business advertisements that often include names of owners, and other principals, and some presentation of history for the county. 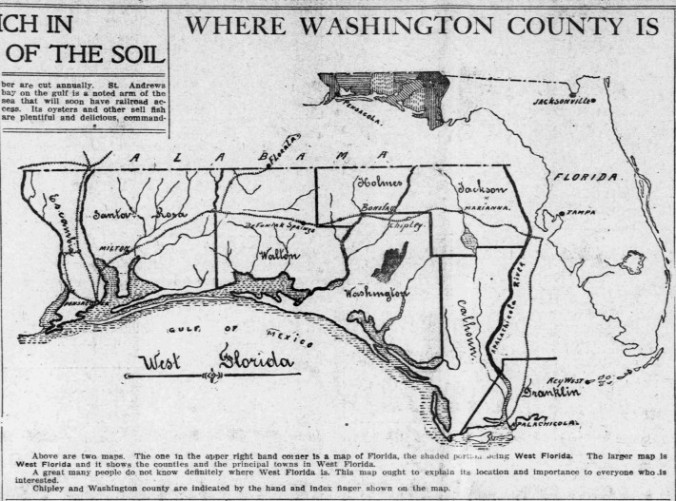 On page one of the section, the very first article presents a vision of agricultural paradise. Two farmers are mentioned by name: Charles E. WILSON and G. A. DANLEY. The postmaster at the time, J. P. SCHELL is named in a brief article about the post office and the existing and proposed mail routes. There is a nice map of the panhandle of 1907 (see above). The third article on page one is about Chipley, a “busy, commercial town”. Having been through Chipley many times I found the second sub-heading particularly interesting: “Destined to be one of the wealthiest, as it is now one of the most important towns in the whole West Florida section.” I’ll just leave that to be absorbed by each reader. The large Dekle Land Company ad on this page lists the names of several principals for the company.

Page two continues the long article on agriculture in the county, including an extensive list of the types of crops grown in the area, and continues the article on Chipley. There is a bird’s eye photo of Chipley looking north from the water tower and pictures of the exterior and interior of The First National Bank. There are two new articles on the county being a source of limestone, clay, and gravel for roadways and one on the government in Chipley. This last one lists the local government officials of 1907: Buell COOK, Mayor; R. C. HORNE, Clerk and Treasurer; John T. BRITT, Marshall; and Aldermen – T. D. WHITE, I. A. HUTCHISON; E. N. DEKLE; Wm KEITH and J. R. McGEACHY. The ad for the Chipley Hardware Company lists some of their products for sale and their principals.

The third page is a long article about how wonderful Washington County and Chipley are, especially in terms of weather and agriculture. There are two nice photos of Sixth Street in Chipley and one of the business section that is much harder to see clearly. The People’s State Bank ad lists officers and directors of the bank.

The fourth page continues presenting Washington County as an attractive location for prospective residents. There are photos of the grade school and the Farrior Drug Company, though the Drug Company photos are very dark at this point in time. All the ads list the people involved in the company or bank.

Agriculture again highlights page five but it also presents a brief history of Chipley, highlights the two newspapers in Chipley and encourages hunters and fishermen not to overlook the abundance in the county. Churches take up some space on page six and some county officials are listed at the bottom of the page (see clipping to the left), as well as the state Senator and Representative. In the center of the page, the possible role of tobacco is added to the products of the county. The last two pages present a number of subjects that are positive for the county and name a number of the movers and shakers during the first decade of the 20th century. Another article on the school system for the county may provide clues to researchers wanting to understand how the schools were structured and conducted at the time. The article on the natural beauty of the county is a nice end to the eight-page section.

Reading the ads on any of these pages can provide names and occupations, political positions, and a number of the names you are likely to see in the 1900 and 1910 Washington County census records. I love old advertisements. Some of my favorites from this section:

Some Washington County Ads from 1907 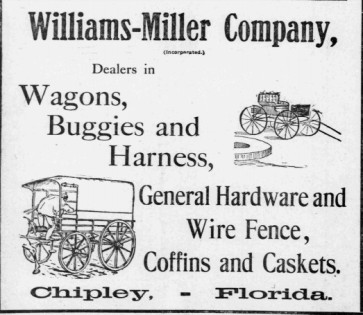 I am going to spend several blogs presenting these special sections from The Pensacola Journal but if you are in a hurry to see if your ancestors’ county has a section and what is included, go to Chronicling America, find the pages for the newspaper and do some searching. You just may find a tiny bit of information you didn’t know about your family.

Next up Holmes County.

3 thoughts on “Washington County: Highlights from the 1907 Pensacola Journal newspaper”