Bay County was one of the late-comer counties in the panhandle. It was created from Calhoun and Washington Counties in 1913 at the same time that Walton County obtained a significant shoreline from Washington County. Two years later, Okaloosa County was formed from Santa Rosa and Walton Counties. Unlike the other postings in this series (see Holmes, Washington, Santa Rosa, and Walton), this glimpse into one of our panhandle counties occurs just months after its formation. Let’s see what the Pensacola Journal had to say about one of our newest panhandle counties.

Page seventeen of this edition of the paper is the first of ten pages on Bay County. It opens with the usual flourish of articles praising the abundance of resources in the county.

“Until June, 1908, St. Andrews Bay was isolated, to a certain extent, for the only way of reaching the bay was by steamer or sailing vessel, or by a fifty mile trip overland from some station on the P. & A. division of the Louisville and Nashville railroad. Of course, even the early visitors to the bay country realized its advantages but the country was sparsely settled, there was no industrial or commercial development and, in consequence, the official recognition which is a precursor to advancement was lacking. Until a year ago what is now Bay County was a portion of Washington county, the separation following rapid development along St. Andrews bay after the first line of railroad reached its shores.”

The article goes on to talk about the early native inhabitants and presents a pretty fair early history of the area with the article flowing onto page eighteen. The page also includes articles on truck farming, oyster culture, the newspapers in the county, the inland waterway, Bay College, Bay Sanitorium, and one on Arthur HUTTON. There are a number of photos including one of the hotels at Bay Head and the wharf in St. Andrews. 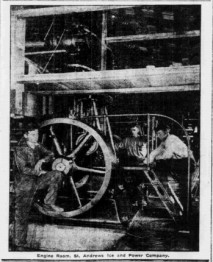 Page eighteen begins with a nice article on St. Andrews in which it is pointed out that the city had recently issued bonds for municipal improvements. A second article highlights a number of communities on the east side of the Bay and a third highlights Del-Mar. The article from the first page of the section is completed near the bottom of the page and goes into detail on some of the history and resources in the area. Advertisements on the page include one for Shea & Shea Cafe in St. Andrews, one for Ware Mercantile Company also in St. Andrews, and a small one for Johnson Drug Company in Lynn Haven. There is a wonderful photo (see above) at the bottom of the page showing the Engine Room for St. Andrews Ice and Power Company.

The culture of citrus starts page nineteen but the article also discusses fruit from Figs to Wonderberries to Grapes. Both Lynn Haven and Parker have an article discussing their virtues. Advertisements include one for Post & Parker, a furniture store in St Andrews; a quarter page ad trumpeting St. Andrews; and the Bank of St. Andrews.

Panama City, “Coming Metropolis of Bay” begins page twenty. Next to the article is a picture of the Magnolia Hotel in the business section of downtown, a block from the water. There is also a photo of The Gulf View Inn, the largest hotel in Bay County. Blocked in the article on Panama City is a list of town officials, surnames include LOOK, McKENZIE, TEDFORD, LEE, JETER, DOUGHERTY, ELWOOD, and COOPER. And as with most of these town articles during this period, a short piece on the success of the Post Office. Ads on the page include one for Panama Fish and Ice Company and Panama Hardware Company. Both ads include company officers.

Page twenty-one is a series of short articles about the county, towns, businesses, railroad

and banks and one on Jesse A. THOMAS. Half the page is ads for businesses in Panama City. All include business principals. Companies in ads are White Steam Laundry, Bay Commercial College, Haire’s Department Store, Magnolia Hotel, The First National Bank, Dougherty & Kelly, The Print Shop, L. J. Royall (Plumber), and H. M. Felix (see above). I wonder what Mr. Felix would think about today’s attention attracting methods.

A full-page ad for Panama City is on page twenty-two. The ad includes a fair amount of information on its development and a discussion of its plans for the future. At the time of the ad, Panama City had not yet been chosen as county seat so you get the impression in reading the article below the ad that this was a pitch for that designation. 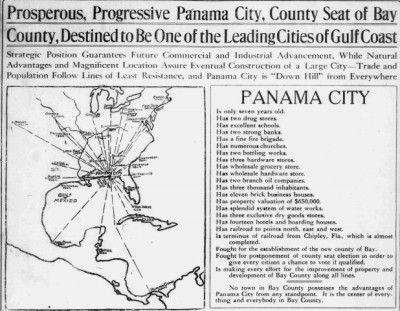 On the next page, page twenty-three, is an article on the schools of Bay County with names of all the schools and the current supervisors of each. There is an interesting article on the fisheries in Bay County with an accompanying picture that is too dark to see detail. A political article by the current appointed sheriff, Charles E. SCOTT, asking to be elected to the position after his current appointment. There is a picture of downtown businesses, two banks and a drug store and an article on acreage in Bay Head being converted into a park. The ads on the page include one for the City Drug Store, Bay Fisheries Co, and the Gulf View Inn. There is also a picture of the Panama City Guard, Florida State Troops that would be much more interesting if the men were identified and the picture had not darkened so much with age. 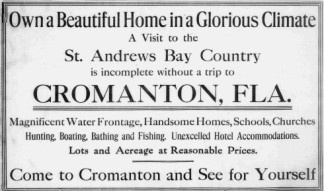 I found the article on the next page on Cromanton, Florida enlightening. Located on St. Andrews Bay, Cromanton has essentially disappeared into Tyndall Air Force Base, though in 1914 it was destined for great things. There is also an article on page twenty-four on the opening of the canal on St. Andrews Bay. There is a photo of the home of T. E. CRAWFORD in Cromanton and a half-page ad for the community as well. There is also a nice photo of Hemming Park and the Soldiers’ Monument in Jacksonville, FL. Guess it was the right size to full some extra space but I found it interesting because I remember Hemming Park well. It was where we had to change buses when we came from the outskirts of town and wanted to do some downtown shopping back in the 60s.

The next to last page on the new Bay County has lots of photos. Street scenes from early Panama City and one of the Ice Plant in St. Andrews Bay. There’s an article on Pecan growing and one on the financial world looking to the south for investment opportunities. Ads on the page include one for the town of Parker and one for Bay Head Inn. Interestingly, there is another photo from Jacksonville, FL. This one of Riverside Park, not far from where my family lived when I was a baby and where I lived before leaving Jacksonville the last time. I wonder if someone with the paper got confused about where Jacksonville was located or if they were just filling space!

The last page of the Bay County Section was by far the one I focused on since it covered some of the sawmill and lumber companies in Bay County. That was the industry that brought my ancestors to Bay County. There is an article on Mooretown and the timber company there and an article on Millville and the sawmill. An article on the “New South” and its ability to support many more people. The article claims that the south could support 30,000,000 more people with its present (1914) resources when compared to European countries. The photos on this page certainly aged better than some on previous pages. There is a photo of Florida Avenue in Lynn Haven, the Power House at St. Andrews Ice and Power Company and one of the Millville German-American Lumber Company. There are photos of R. L. McKENZIE and J. H. DRUMMOND and ads for the Moore Timber Co, Real Estate sold by J. M. HUGHEY, and J. D. MARTIN wholesaler of fish and oysters in Mooretown.