I am always surprised at the number of times I search for an ancestor on Ancestry.com and see entry after entry for a person of the same name and when you click on one of the family trees and look at the family, the person appears to be an only child, at least from that particular researcher’s point of view. They are focused on their “line” and nothing deviates them from focusing on that one person who they believe is a direct ancestor. And often these are the same researchers who only focus on the males up their ancestral line. There are many very good reasons for getting out of this mindset. Let me list a few for you, then we will talk about ways to broaden your research.

1) Siblings of your direct ancestor are also your relatives. If you ever decide to do a DNA test, the people who match you will more likely than not be descended from a sibling of one of your ancestors. If you already know all of your ancestor’s siblings, you stand a much better chance of connecting those dots. These siblings might also have had a genetic illness that your direct ancestor was only a carrier for and knowing that the disease is in the family may be very important one day.

2) Your ancestor really wasn’t born under a rock and raised by wolves, though the absence of a lot of records may make you think that. They were likely raised in a family of people. Parents, and maybe a step-parent at some point, and siblings and half-siblings, likely more than a couple. So the more time you spend identifying all the wives, or husbands, and any children from each marriage, the better you can understand some of the environment your ancestor experienced as a child. That could be important to begin to understand aspects of their personality and character, both good and bad.

3) Your ancestor may have lived “off the grid” so to speak but their siblings and neighbors may not have. Identifying siblings and neighbors and researching their lives may not only give you clues to your ancestor but may provide evidence from their records that you can’t find in records of your direct ancestor. While your ancestor may not have left a birth or death certificate with the name of their parents, a younger sibling could have been born after vital records were required and names are given that you can research. Neighbors may be relatives, cousins and aunts or uncles or just close friends. Your ancestor may have witnessed a will for a close friend, or been named an executor. And it is a well-established phenomenon that single women in a family are most likely to collect and maintain family photos, stories, and information. Finding a will for them may help to find some of this information.

This may be a Sunday School class or possibly a summer program. The man to the far right below the flag is William Franklin King

4) Putting your ancestor into context helps to understand them as people. They were certainly influenced by family and friends, just as we all are. Tiny little references can give you a sense of who they were and how they saw themselves and the world they lived in. It makes them more real and not just a list of names on a piece of paper. When I started working with the Yellow River Baptist Church records I discovered one of my female ancestors was a bit of an independent-minded woman, especially for the late 19th and early 20th century. I knew she had decided to raise her children alone after her husband died at the end of the War for Southern Independence but I found that she also had a social life. She was reported to the church having been seen at a dance. When given the opportunity to ask for forgiveness and say she wouldn’t do it again, she indicated that she couldn’t do that. She had enjoyed dancing. She was excluded from the church for not being willing to ask for forgiveness. In a small community that probably wasn’t the easiest choice but for her it was the honest one.

Let’s pretend I’ve convinced you of the importance of whole family research. Start by searching census records for your direct line and then each child listed. Look for everyone in any census available, federal or state. Then look for birth, marriage and death records. Don’t forget land records to place them on a map and probate records. On census records make a note of neighbors on both sides of your ancestors and any other family in the general area with the same surname. When you have your family filled out pretty well, research these folks. Look for everyone in county and local community histories and search local newspapers. If someone who was a neighbor left written information about the community your ancestor lived in, that can help a lot in understanding what the community was like. 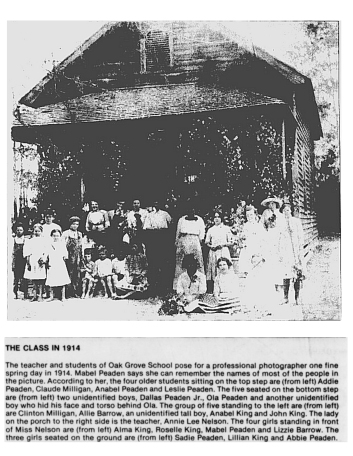 For me, that person was Mabel Peaden. She was one of those single women, schoolteacher and contemporary of my grandparents, as well as a church clerk at Yellow River Baptist Church. In the 70s and 80s, she was a popular person to be interviewed by local newspapers on various subjects in the upper Yellow River area. One of those articles provided me with some information on the school my grandparents attended and a picture of the students and school from 1914. In it was my grandmother and a number of her siblings and names of a number of the schoolteachers, including my great-grandfather, William F. King. Just keep in mind, these sources may not always be accurate. Some local historians in previous years were more inclined to storytelling than fact providing. As with all data you collect, more than one source (preferably three) and independent of each other, is important to actually document your ancestor. That is not always possible but you should try. Exhaust the possibilities in your research and if you are mainly depending on online resources, go back and check to see if records have been updated on a regular basis.

This will be my last weekly genealogy post. I will be posting one on 15 November and then I take the period between Thanksgiving and Christmas to focus on my home and family and finishing up the draft of my next book. I will return to genealogy posts on 27 December. You are always welcome to post a comment here at my blog or find me at fb.me/NWFloridaHistory where you can like and follow me and comment or send me a question.