I personally can’t think of a pastime, hobby or career choice that would be more rewarding than genealogy but as a long-time family historian, and a Southerner inclined to a bit of nitpicking, I do have my complaints. If I could wave a magic wand, I would install good record-keeping, all the way back to our earliest beginnings and insist that women be documented and named in every record in which they should be named. Not just their given names BUT their maiden names as well. Every time I manage to identify another female ancestor, I get a nice, warm feeling that pushes me forward to tackle another one. Let’s look at the whys and the ways of researching female ancestors.

I’ve often wondered if the failure to work female lines in a family tree by a lot of family historians is because they are rooted in the belief that the line from which their family name comes down to them is the only one that really counts or if it is because it is just darn difficult at times, especially when you get back to the early 20th century and beyond. Let me start by listing some reasons I think it is important to research female lines (and their siblings).

We have some of the whys, let’s talk about some search methods before we look at alternate records.  There can be any number of reasons why you can’t find a marriage record for a pair of your ancestors. To name a few:

Fires occurred in local and state repositories over the years, both intentionally and unintentionally. Parts of the South have had a somewhat loose structure for maintaining records and it has changed over time. Check in both local and state repositories for the years their records cover and ask if the year range you are looking for might be somewhere else.

Spelling has only recently been standardized, especially for names, and not every clerk was a spelling bee champion. Often names were spelled as they sounded. And if you are using an online index, keep in mind that the transcriber could have misinterpreted a letter or two. I searched for years for my great-grandparents marriage license.  I knew they were both in Baldwin Co, AL in 1880 but that proved fruitless.  I searched in surrounding counties without luck.  I finally found them in Escambia Co, FL.  John Jesse Barrow’s name was listed as Jesse Barras and Lucenie “Cennie” Hinote’s name was Cena Hinote. 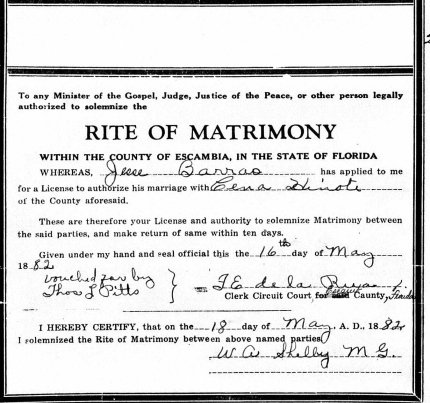 If the marriage occurred very early in Florida panhandle history, you should familiarize yourself with the geography and history of towns and communities where your ancestors lived. Don’t make the mistake of assuming your ancestors had the same options for marriages as you would today. Churches, when they existed, were few and far between and pastors were often circuit riders and only onsite occasionally. The closest town where a couple could be married might be in another county or in an adjoining state. Remember early in the Florida panhandle history our ancestors dropped into Florida from Alabama and Georgia and often didn’t move far from the borders. The roads, when they existed often went north before they went south, east, or west.  One or both of them might have had family still in an adjoining state and they went back there to marry.

These might be long-term or short-term. Short-term was often because the preacher wasn’t going to be back for a few months so the couple would declare they were married to the community, set up a household and when the preacher next came to town they got married. It may or may not have been recorded in official records. And it may or may not have ever been presided over by a preacher.

So what other records can you use to discover a female ancestor’s maiden surname?

Make this a year where you break through one of those female brick walls. You never know. That might be the line that provides a link to a well-known person or a critical event in our history or it just might prove to you that you really are related to everyone else who has a long family history in the panhandle.