This will not be my usual kind of post. I’m going to back up a bit and take a view of the entire United States. I started this post very late. I’m writing this early on the morning of the 4th of July. Our nation is struggling to define who we are and who we want to be. The divisiveness is palpable in many of our public spheres. “Culture Wars” seem to be tearing us apart. Neither side is even attempting to understand the other. There is just a lot of yelling, threatening behavior, and too much righteous indignation on both sides.

This struggle of who and what we are is contained within a backdrop of ever rising numbers of COVID-19. We lead the world in numbers of reported cases and even if you wish to believe that every country is not reporting accurately and that may well be all of them, we are not in a good position. The United States has a bit over 4% of the total world population and yet we have 25% of the COVID-19 cases and 25% of the deaths. This is not due to massive testing, our number of tests to total population puts us around 9th or 10th. The positive rate has been rising in the tested population and that indicates rapid spread of the disease. While a number of other countries have managed to bring their outbreak under control and severely decrease the number of cases and hospitalizations, we have not. Why that is the case has a number of reasons, I believe, but in this blog I’m going to focus on just one – the seeming unwillingness by a significant segment of our population to sacrifice personal convenience for a prolonged period for the good of the country. We have gotten so wrapped up in a warped sense of “individual freedom” that we fail to grasp that individual freedoms only exist until they touch another person’s individual freedoms. Then both must be tempered to maintain a functional society and community. Stick with me. Hopefully, I will give you something to ponder.

From the very beginning of our history as a colony of Great Britain our ancestors had to struggle and sacrifice. Many died just by coming to America. I have friends whose ancestors were brought here against their will and they sacrificed family and themselves to build this country from the ground up while sacrificing all of their freedoms. While slavery was accepted during the founding of our country and for decades afterward, our failure to talk about the racism underlying slavery in the U.S. and its ongoing impact, is what is truly the failure we are responsible for today. While that might imply that only those who arrived on these shores had to make sacrifices, that is far from the truth. The Native peoples who were here made extraordinary sacrifices. Their livelihoods, their land, their families and their lives. We are a long way from achieving the ideals we espouse, especially when it comes to the people of color in this country. That may trouble those who want to think of us only in terms of positive images but to learn from our history we must acknowledge all of it not just the parts that don’t make us feel uncomfortable. That is not hating this country. It is embracing it in its totality in the hopes of making it a better place tomorrow for those who come after us. 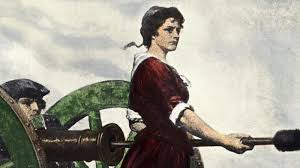 During the American Revolution it was dangerous to be a Patriot or a Loyalist depending on where you lived. It was dangerous and a daily struggle for families left at home. There was no running down to the corner grocery for food. You never knew if enemy troops were going to appear on the horizon and take everything they could carry and damage or destroy the rest. At the Battle of Monmouth, Mary Ludwig Hays, seven months pregnant and trying to stay close to her husband saw him go down while she was carrying water to the artillery to keep the cannons and the men cool. She immediately took his place, swabbing and loading the cannon. Our ancestors’ sacrifices did not end with the American Revolution. Life has never been unblemished by war, economic disruptions, or natural disasters. All of our ancestors sacrificed during WWI and WWII, both in fighting and at home. Resources were scarce. Nearly everything was rationed during WWII.

Our heritage from all of our ancestors is this country, with all of its positives and negatives, and the massive sacrifices that have been made to slowly carve out something worth the pain and loss. It is not battle flags or statutes. It is the understanding that when called to sacrifice, whether great or small, we come from a long line of people who have paved the way for us and that we should not be whiny about any inconvenience or imagine there is any such thing as freedom to do anything without sacrifice. Life can call on any of us at any time to sacrifice for our families, our communities, our countries and for the planet. Our history involves all of our ancestors’ experiences, both good and bad, both pleasant and unpleasant because we would not be here without all of those past experiences. Our American culture is a wonderful tapestry from every group of people who have helped to create it. We have to learn to acknowledge all of our history, not just some, and to recognize that some benefited and some suffered from the same events. We can learn all of that, and acknowledge it, without discounting one side or the other. But we must learn to talk to each other, not at each other. And that requires listening with your heart not running off at the mouth or tweeting or sharing snarky posts.

You might notice that none of the sacrifices I’ve mentioned included not getting hair cut or nails done, not being able to go to a bar or a restaurant or not being able to party with friends at the beach. It doesn’t include blatant disregard for the welfare of others in the community. Instead of using our sacrifices in March and April to better prepare for getting back to work safely, we appear to have decided to squander those sacrifices to some vague political purpose, doing willful ignorance rather than cautious engagement. Sacrifices can be big or little; for an individual, a family, a community or a country. They can be temporary inconveniences or permanent. They are required of all of us but when they are for the greater good of society or our unity as a nation, a little less whining would be appreciated and certainly a lot less self-centered entitlement from both sides of the political yammering. Sacrifice is what is expected of us to be valued and useful citizens of both the planet and the country.

The last few generations in our country have experienced mostly prosperity. Though we’ve had abiding issues that needed resolving we have pushed them in front of us and continued with playing, spending and ignoring the hard work. That mindset has led many to think we no longer have to sacrifice, that we are entitled to instant gratification. That everything we want we should have. That our freedoms have been won by others and are now endless for us. It doesn’t work that way. Life is not a given. Our planet keeps us in a constant state of struggle between the droughts, floods, tornadoes, hurricanes, earthquakes and pandemics. It was designed that way by the Creator. I tend to think of it as a means of providing ongoing humility training. Our country’s governing structure is more fragile than we think. Representative democracies are not that hard to flip into more authoritarian structures because they are messy and take lots of effort to maintain. Violence because we are angry only feeds that possible transition, it doesn’t generally bring positive change. Sacrifice is more than fighting in the military or protesting or giving up dinner out for a few weeks. It is putting the greater good above yourself. It is about thinking about someone other than yourself. It is about being engaged even when it is hard, and painful, and inconvenient.

Floridians, and Americans of all colors and political beliefs, must rise to this extraordinary occasion and do the right thing. We must sacrifice our comfort and maybe our pride and vision of who we think we are for the greater good. Short-term gains are not always long-term wins. Just ask the British if that worked for them at the end of the 18th century. We need to stop looking for scapegoats to blame. We need to stop whining. We need to stop the wanton destruction. We need to try and understand the pain that others may feel about something we see as “heritage”. We need to put others before ourselves and be grateful for the opportunity to serve. Ask yourself if the Allies would have won WWII, if Americans had acted as many are today about the rationing and restrictions imposed on them during the war. Sometimes sacrifice is voluntary and worthy of recognition. Sometimes sacrifice is forced on us and we either rise to the challenge or fall whimpering into the dust. Your choice. Choose wisely. Our nation depends on it.